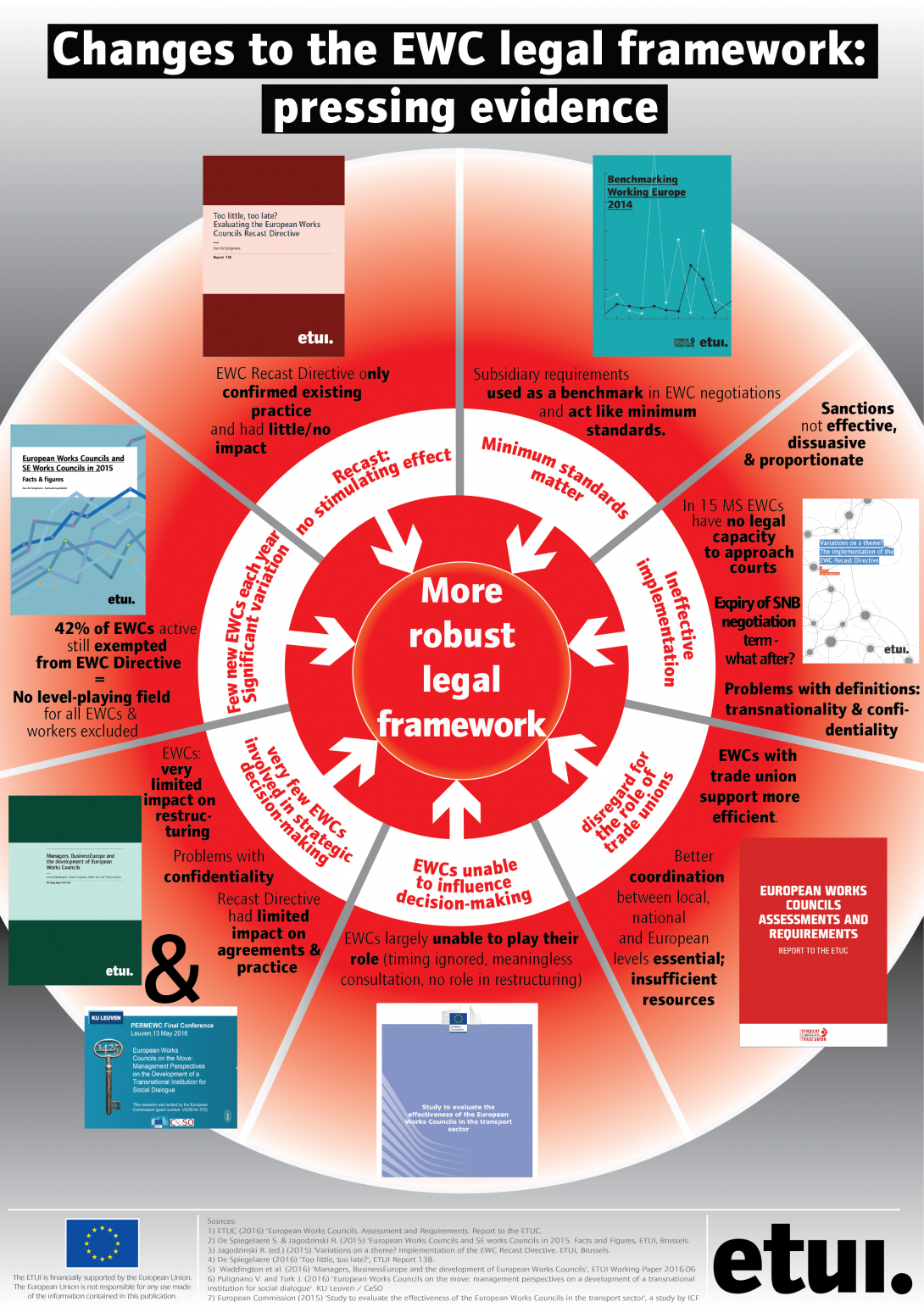 In the area of European Works Councils, 2017 was spent waiting for the Commission’s long overdue report on the implementation of the EWC Recast Directive. Originally due in 2016, it was repeatedly postponed and then promised to be announced as part of the Social Pillar in spring 2017. This promise could not be fulfilled either. The least likely obstacle to the publication of the report seems to be the availability of research evidence and evaluations on the topic. The various pieces of research published between 2011 and 2017 concur in their diagnoses and solutions. First, several of the EWC studies published (European Commission 2015; ETUC 2016; Pulignano et al. 2016; Waddington et al. 2016) concur that despite the modifications to the Recast Directive, EWCs are still unable to play their role. The reasons range from insufficient safeguards concerning the content and timing of information and consultation, as well as the management’s reluctance to endow information and consultation with a good faith intention to make it a meaningful part of the company’s decision-making process.

Second, as the above pieces of research indirectly suggest and three further studies explicitly put forward, the Recast EWC Directive had only a marginal impact in the two main goals it set: 1) increasing the number of new EWCs and the quality of the existing ones (De Spiegelaere 2016; De Spiegelaere and Jagodziński 2015); and 2) improving the quality of implementation, legal certainty, effectiveness and transparency of national legal frameworks (Jagodziński 2015). Admittedly, the Recast Directive did have an effect in that it encouraged management and labour to adopt some new definitions when renegotiating the agreements (mainly thanks to the support from trade unions and to learning processes within EWCs), but the overall low share of renegotiated agreements limits this impact. Third, studies conducted on EWCs in the past years point towards some key issues where the Recast Directive failed to make a difference. One such example are definitions that were only partially amended: while information and consultation were more precisely delimited, no similar upgrade was applied to definitions of the transnational competence of EWCs, the confidentiality of information, or sanctions (ETUC 2016; Pulignano et al. 2016; Waddington et al. 2016; Jagodziński 2015). Furthermore, these studies also identify the persistent problem of inadequate links between the EU level of information and consultation (EWCs) and national structures as a factor which has diminished the potential impact of the Recast Directive. Fourth, the studies share the common conclusion that EWCs do not have access to appropriate and sufficient resources to fulfil the expectations placed in them (De Spiegelaere and Jagodziński 2015; ETUC 2016; Jagodziński 2015). These resources comprise both the institutional facilities (access to justice; means of enforcement; a single annual meeting) and the material ones (no defined budget; managements’ strategies to limit operational costs; limited access to training or trade union experts, etc.). Finally, research also concludes that the gap between well-functioning and poorly functioning EWCs is growing at an even greater rate than it was in the past (ETUC 2016; De Spiegelaere and Jagodziński 2015). Not all of the above problems can be resolved solely by improving legal frameworks for EWCs; many of the solutions rely on improving the daily and strategic practice of EWCs and their members. Nevertheless, the Commission’s long-awaited report on implementation represents an important milestone. If it not only identifies but also suggests ways to correct the myriad shortcomings laid out above, it may even prove to be a game changer.