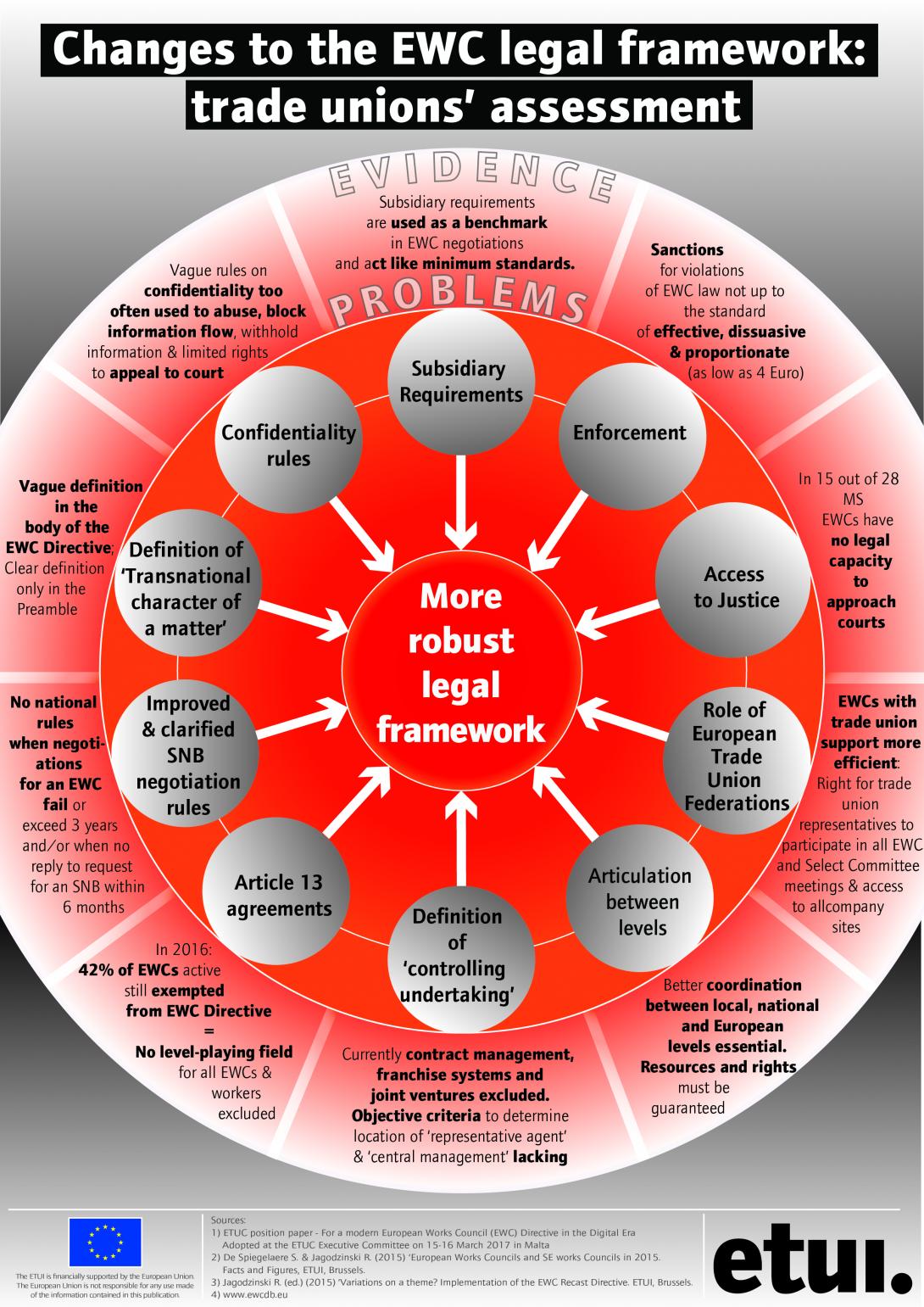 While not dismissing the need to improve practice, European trade unions presented a catalogue of demands for changes to the current legislative foundations for EWCs (ETUC 2017a). These demands are largely built upon the foundations of solid research evidence (see Figure 5.5) and are clearly supported by the practical experience gained by unions in coordinating hundreds of EWCs. The ETUC catalogue of ten key demands can be grouped into several clusters. The first cluster comprises demands for the improvement of the existing definitions in the EWC Recast Directive. The first definition in this group is the central notion of the ‘transnational character of a matter’ (Art. 1.4); it is currently formulated too generally and vaguely, hence EWCs are too often denied the right to information and consultation by companies unilaterally classifying matters as purely national. Trade unions demand that the existing definition of transnationality be complemented with the criteria set out in the Preamble (Recital 16).

A second definition requiring review is the exemption of the so-called Article 13 agreements (i.e. pre-Directive agreements) from the standards of the Directive. In 2018, 22 years after the entry into force of the EWC Directive, 37% of active EWCs still operate on the basis of such exempted pre-Directive agreements (www.ewcdb.eu, January 2018). Trade unions rightly argue that the reasons to maintain the exemption (which was originally designed as an incentive to stimulate the establishment of EWCs prior to 1996) can no longer be justified and should finally be abolished. The third definition for which the trade unions demand improvement is that of the ‘controlling undertaking’ (Article 2.1) which currently excludes common forms of corporate organisation, such as contract management, franchises, or joint ventures. Furthermore, the lack of objective criteria to determine the location of the ‘representative agent’ of companies whose headquarters lie outside the EEA invites arbitrary ‘regime shopping’. The fourth area for improvement are the vague and excessively restrictive provisions concerning confidentiality which are found in many negotiated agreements; too often, these are used to exclude or block information and consultation processes. When combined with the limited options of seeking judicial clarification or remedies, these definitions effectively cripple EWCs.

Other trade union demands point to the quality of the subsidiary requirements (see also ETUI 2014: 98 on their standard-setting impact), the lack of access to justice, and the enforcement of EWC rights. One of the most glaring examples of the latter is the lack of an unambiguous statutory obligation to set up EWCs where requests to set up Special Negotiation Bodies (SNBs) have been ignored, or where SNBs have negotiated fruitlessly for three years. As evidenced by research (Jagodziński 2015), the national frameworks in this area leave much room for improvement and this remains a significant hurdle for attempts to set up EWCs in the first place. The last cluster of demands concerns the lack of resources for EWCs. Firstly, as practice shows, EWCs with trade union support operate more efficiently; the problem remains, however, that trade unions are too often denied access to EWCs. One remedy is to formalise the right of experts to participate in all EWC and Select Committee meetings and all other activities of EWCs. Secondly, more resources and rights need to be geared towards an appropriate, issuedriven interlinkage between the EU level of information and consultation and its national counterparts. Provisions to ensure this are currently left to the Member States to define, yet none have done so in any meaningful way.