There are multiple and wide ranging reasons why worker participation is an essential part of a modern industrial relations system and the foundation of European Social Model.

Because of the international context

Even though some managers still regard employee involvement as an unnecessary burden, workers’ participation is a commonly recognised as an asset to both labour and management:

“accumulating evidence from north-western Europe shows that well-functioning employee representation can play an important role in the modernisation and performance of a workplace.”

At the same time workers’ participation is more than that: it is an expression and embodiment of democracy. Workplace democracy comes in many shapes and colours. 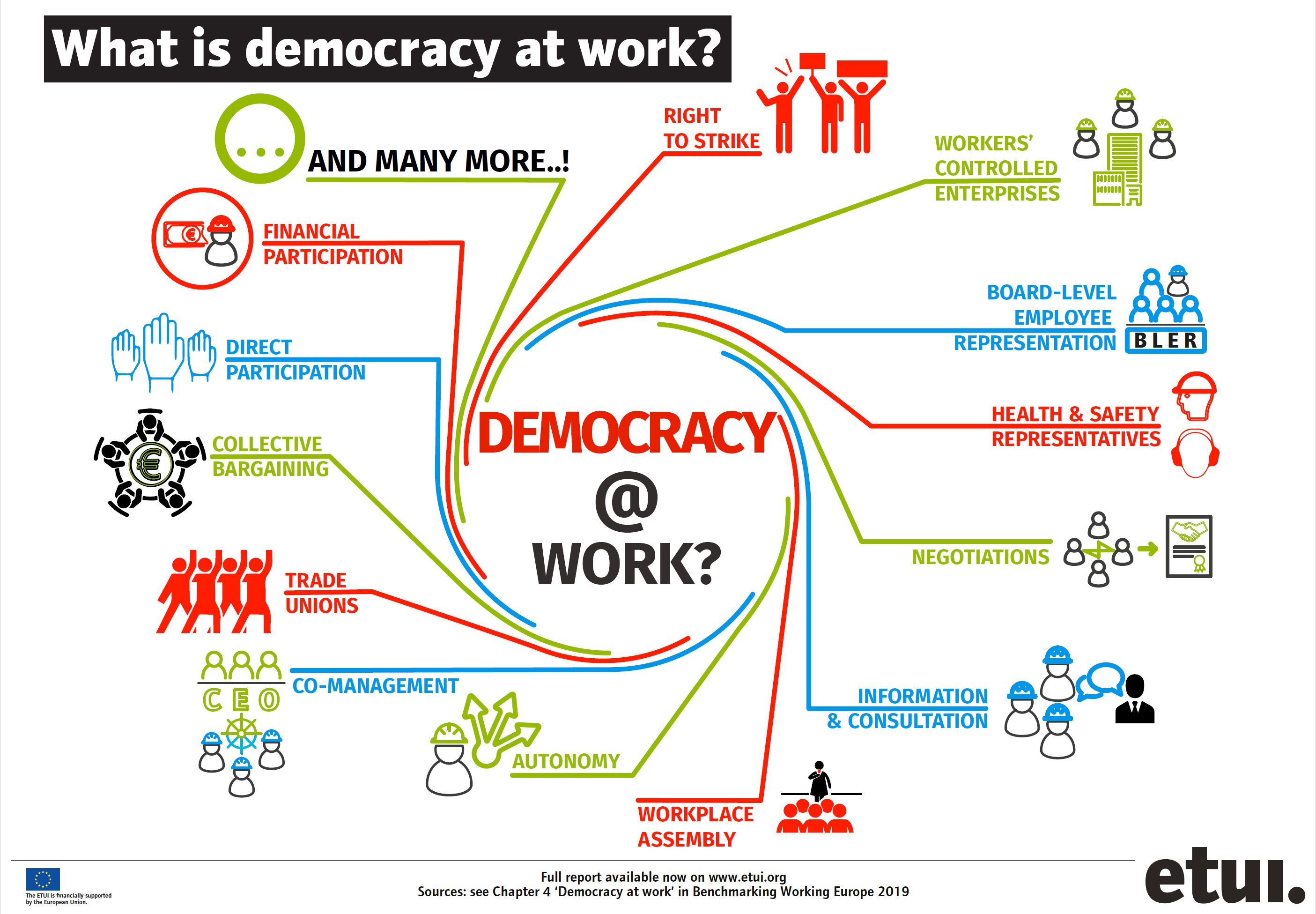 ETUI’s recent research (2018-19) into the matter compiled numerous positive links of democracy at work among others to increased democratic involvement of citizens at large, better health and safety protection of workers, more equality, more sustainability and higher productivity. 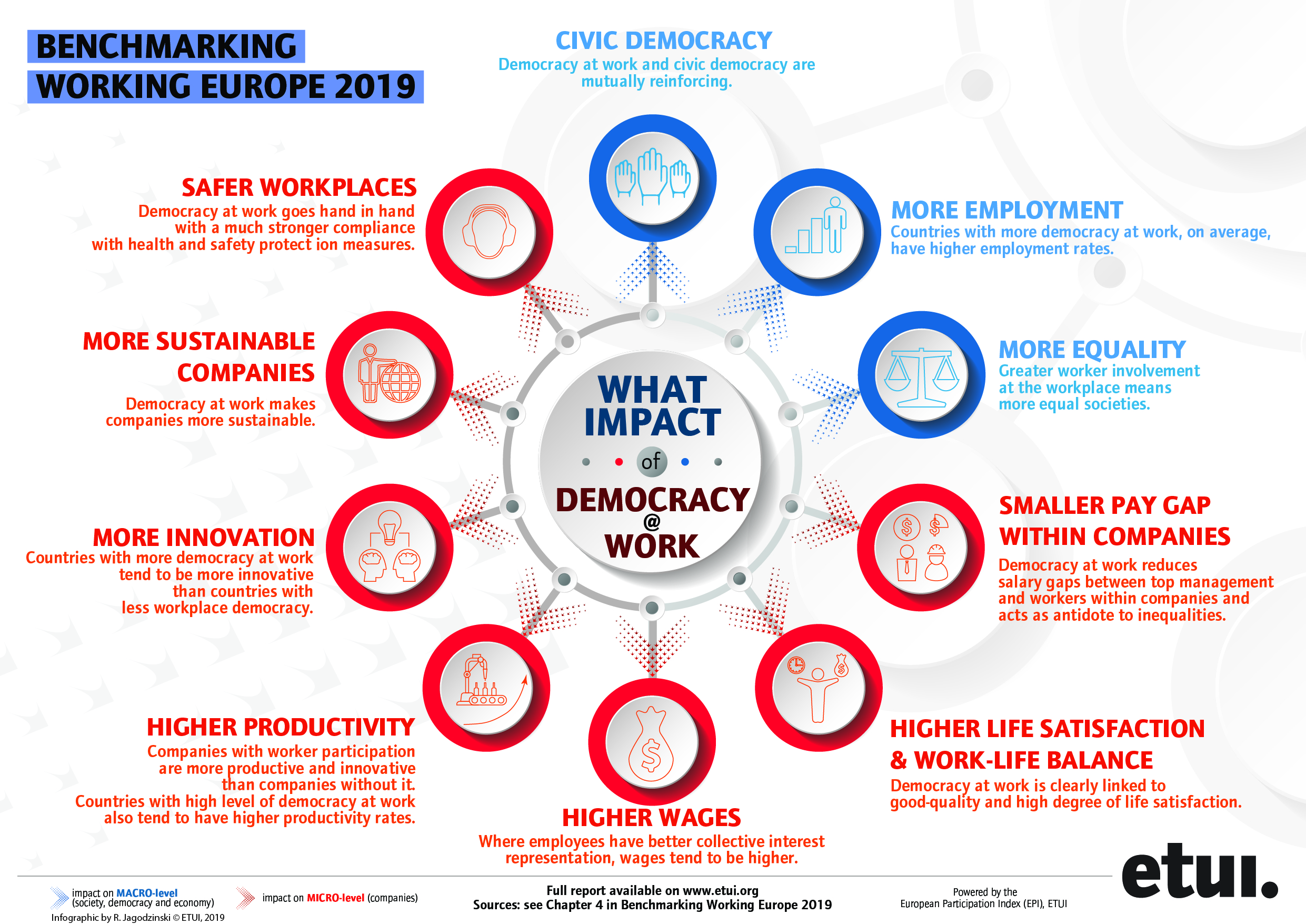 More information: The issue of democracy at work and its relationship to various aspects of democracy as well as recent developments were explored recently at length in the ETUC and ETUI (2019) Benchmarking Working Europe – Chapter 4.

A graphical online presentation (in Prezi) based on the contents of this work can be found here.

Research on the impacts and inter-linkages of democracy at work and workers’ participation has been an innovative stream of analysis by the ETUI where the European Participation Index has been developed since 2010.

On top of the measurable impacts and inter-linkages of democracy at work to other aspects of economy, democracy at large and company performance it also has deep moral and philosophical foundations compellingly expressed by prominent thinkers, politicians, academics and activists.

Because workers' participation is NOT a barrier to smart, sustainable and inclusive growth

The overarching economic strategy of the EU, as stated in the Europe 2020 initia- tive (European Commission 2010), is the achievement of ‘smart, sustainable and inclusive growth.’ Does workers’ participation hinder or help the EU realise its ambition of being ‘smarter, greener and more inclusive’?

This analysis is based on two data sources. The first is Eurostat, which gathers data on the EU’s progress in meeting goals set out in its Europe 2020 strategy in five areas: employment, R&D, cli- mate change and energy sustainability,education, and fighting poverty and social exclusion. In each of these areas the EU has defined statistical indicators which allow countries to measure their progress in meeting specific goals. This data is accessible through a dedicated Eurostat website; a series of publications analyse this data and the progress of each coun- try and the EU as a whole towards achieving these targets (Eurostat 2015). A notable aspect of Europe 2020 is that it goes beyond standard economic measures (e.g. GDP growth) to look at a variety of social and environmental outcomes. However, workers’ participation is not mentioned in the Europe 2020 strategy document, despite evidence from numerous studies that it can have a positive impact.

An updated analysis based on Eurostat data from 2009-2014 (i.e. since the onset of the crisis) shows that the strength of workers’ participation continues to be strongly associated with positive outcomes on Europe 2020 head- line indicators for all five of the Europe 2020 strategy areas. As shown in Figure 4.12, the group of countries with higher than average scores on the EPI per- formed better than the group of coun- tries with below average scores on all of the following indicators: 1) the employ- ment rate in the 20-64 age group, 2) R&D expenditures as a % of GDP, 3) share of renewable energy in total energy consumption, 4) share of early leavers from education and training, 5) tertiary educational attainment for the 30-34 age group, and 6) share of population at risk of poverty or exclusion. The relationship with the strength of worker participation is particularly strong in the case of R&D expenditure, which is twice as high in the ‘strong rights’ group compared with the ‘weaker rights’ group (see also Figure 4.12 showing correlation of the EPI and R&D in individual countries).

The cause of each of these out- comes is of course complex and can- not be reduced to one factor. However, the strong association between positive outcomes on Europe 2020 indicators and the EPI suggests that worker participation helps rather than hinders the achievement of ‘smart, sustainable and inclusive growth’. As such the strengthening of workers’ participation in Europe could help the EU to reach these ambitious goals.

Demanding higher pay, safer workplaces or changes in work organisation is a chal- lenge. Individuals putting forward these demands risk provoking a conflict and recriminations. Even if the individual’s situation is improved, it is not necessar- ily improved for all. So why should indi- viduals take these risks? If all employees reason the same way, then the employer may have no way of knowing if anything is going wrong, and the organisation (and the employees) might suffer.

To this typical problem of collective action there is a simple solution: collec- tive voice. Employees elect representa- tives who can voice ideas and complaints on behalf of the workforce. Unions, works councils and similar institutions serve to provide such a collective voice, to the benefit of both the employees and the companies.

Using data of the 2015 European Working Conditions Survey of the European Foundation for Living and Working Conditions in Dublin we can check whether this is correct, and the results look promising. As can be seen in Figure 5.10, employees with access to collective voice are 35% more likely to say they are involved in improvements in their work and 22% more likely to say they can influence decisions in the workplace. So where employees have the opportunity to voice ideas and concerns collectively, they also tend to share them more as individuals. Collective voice and individual voice go hand in hand.

are more likely to intend to stay in their current (or a similar) job: 71% compared to 60%. They also have significantly longer tenure than employees without access to collective voice (10.3 years vs. 6.5 years).

As Freemand and Medoff already said in 1984, employees can react differently to issues in their jobs, although one reaction (voice) is clearly preferable to the other (exit). Collective voice in the form of a union or a meeting in which repre- sentatives of employees can (collectively) voice concerns is beneficial. It is associ- ated with more employees individually voicing ideas for improvement, being more motivated and being less inclined to leave the job. Even when controlling for possible effects of the company size, the country, the employee’s occupation and the sector, the shown relations still stand collective voice in the shape of a trade union, a works council or similar institution is an asset for employees and therefore also for companies.